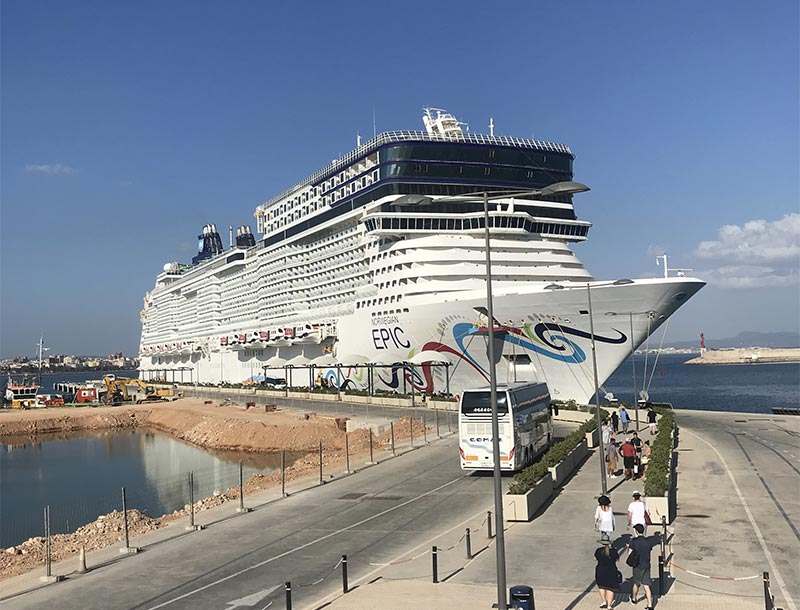 The Norwegian Epic, built in 2010 and refurbished in 2015 is home to over 4,000 guests and almost 2,000 crew members. Myself and my partner embarked on a 7-night cruise from Rome, Italy. Cruising on a budget we decided to get public transport to the ship from the airport. Instead of a €150 private transfer, we came straight out of the airport to a €5 coach which took us straight to the train station in central Rome. We then took a direct train for another €5 each to the train station, Civitavecchia. This train station is within walking distance of the port. The Italian public transport is very easy to navigate and with a little understanding of Italian, we managed to get to our destination within 2 hours and having only spent €20. 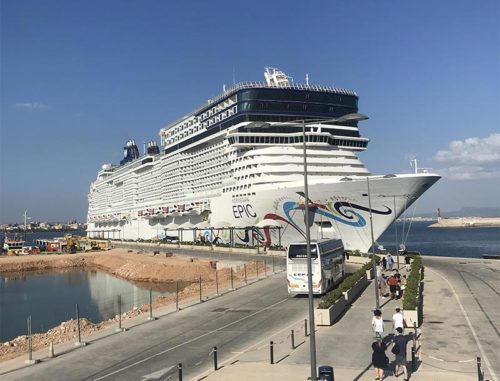 Arriving to embark on the ship at a little after 1pm, I was sceptical about the length of the actual embarkation process as passengers were allowed to embark from 12pm. Having heard negative reviews on NCL’s embarkation process, I was pleasantly surprised. The queues were very minimal at both security and check in, from entering the terminal to actually stepping on-board the ship was no longer than 20 minutes. We received our pink cards, compared to the orange cards passengers received when embarking in Barcelona.

We booked an inside cabin and whilst the lay out is a little different with the shower and the toilet actually separate, we had plenty of room and storage. Our cabin steward was SO friendly! He made us feel very welcome and cleaned our cabin twice a day. 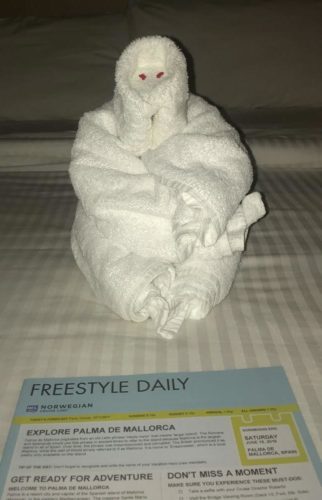 Having received a 3-day speciality dining package with our cruise deal we decided to book at the Teppanyaki, Cagney’s (the steakhouse) and Moderno (the churrascaria). Whilst Norwegian boast about their ‘Freestyle cruising’ you still have to book a number of things including: entertainment, speciality dining and tenders. We dined at Moderno first, this type of dining is very hard to get wrong, whilst we enjoyed the meal the service was quite slow for drinks. Considering the cover charge is normally $25 each we were disappointed by this, especially after my Malibu and Coke was given to the 12-year-old sat on the table next to us! I know this, because he took a sip and complained of it tasting like ‘sunscreen’. Whilst a simple mistake, NCL, an American cruise line who is usually very pedantic about their alcohol policy did not seem to care in this instance.

Anyway, the next day we visited one of the complimentary restaurants. There are a few on board, but the main two for dinner are: The Manhattan Room and Taste. I hadn’t heard great things about Taste so we weren’t rushing to there. The Manhattan Room as a complimentary room was very good. The three nights we attended, we always asked to sit by a window just to try our luck and we were pleasantly surprised that they could accommodate us each time. The food was good, but expected for a complimentary restaurant. Taste on the other hand lived up to its expectations, avoid! Having waited for 20 minutes just for my drink, me and my partner decided to leave after the table next to us had already complained of slow service and walked out themselves.

We then dined at Cagney’s which was the steakhouse on board. Usually I wouldn’t have booked this kind of restaurant, but the reviews sought that this restaurant was a must! The food was AMAZING and the service was the best we had received all holiday. It is a MUST and worth every penny!

Finally, we dined in the Teppanyaki, similar to all over the world, the food and the show was very good. Again, the only thing to let this down was the wait for our drinks, being on an all-inclusive package, we wanted to make the most of this but felt like we were made to wait too long. And again, felt like the extra charge you were made to pay for this dining experience was not necessarily worth it.

We were able to try out all the waterslides on the second day. This cruise is perfect for families! With so many activities and places for them to play. There is also plenty of places to sunbathe. Even on the sea day, I wasn’t expecting to find a sunbed very easily but pleasantly surprised by the fact there were so many! The only let down I would say is they only have 3 VERY small swimming pools (not including the Haven) on the whole of the ship. Thankfully there was only one sea day, which meant we were able to fit in the pool on other days!

During this cruise we sailed to Florence, Cannes, Majorca, Barcelona and Naples. Our travel agent arranged our tours instead of booking it with the cruise line and this saved us considerable amounts of money. All the destinations we went to were beautiful and we felt like we had more than enough time for each!

Overall, we thoroughly enjoyed the cruise. Whilst the food service was a little bit of a let-down, the food and ports made up for it! Perfect for families and couples, NCL perfect for cruising on a budget!